Each script introduction includes a brief description with selected honours and quotes from critics, directors, and producers.

*And Bella Sang With Us

A drama with humour and song inspired by Canada’s first women police officers. It’s 1912. Constables Minnie Miller and Lurancy Harris arrive in the area now known as Vancouver’s Downtown East Side/Chinatown and run smack into societal and family pressures, political corruption, ‘The Lord of the Bawdy Houses’, and the volatile Bella. Will the two Constables be able to save a young woman from a life on the streets? Will they find their way in a police department and a city not used to female authority figures? Will running after criminals while wearing floor-length skirts ever get easier?

Running time: approximately 90 minutes. With doubling can be performed with a cast as small as 5: 4 Women and 1 Man. 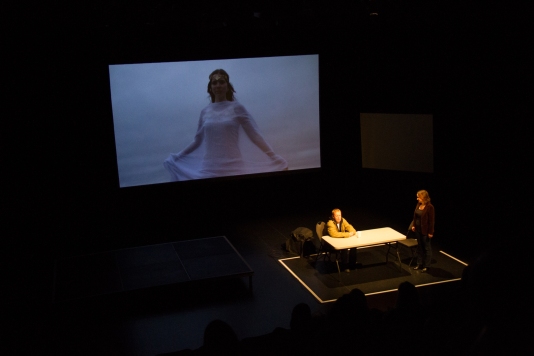 Mark is held in a police station and interrogated about a violent crime. He holds his story close. Meanwhile, his secrets are unearthed and illuminated for the audience via Mark’s mind and his movies, and it becomes clear that the crime he’s accused of committing is inexorably intertwined with another violent act and his obsession with making films. Mark lives most comfortably behind the camera, watching, always watching, and recording.   A small handheld camera and digital video production, live feed and pre-recorded, are integral to the premise, conflict, and, finally, the climax and mystery at the heart of Centurions.

Centurions has not yet received a full production.  Running time estimated 80 minutes. No intermission.  The play is written for five actors: 2 M and 3 W.

Despite its sinister undertones, what’s compelling about Mark’s interrogation … is his endearing fragility – even his memories are mediated through cameras and commercial fantasies. In the end, solving the crime is less important to us than seeing Mark live fully in the material world around him (Sean Johnston, Editor, Ryga, A Journal of Provocations )

Centurions is a creeper. … It is a powerful and brave piece. (Rebecca Burton, Playwrights Guild of Canada)

Anna, an established painter living in Canada, returns to Munich – the city she ran from decades earlier. As this poetic and powerful drama unfolds, Anna forces her family to answer tough questions about their past and the events of World War II. While her mother plays a private concert, history unravels, and Anna is confronted with a moral dilemma of her own. Inspired by factual events, Herr Beckmann’s People explores the question: How do we live with the choices we have made?

… moves past the judgment of the victors to a place of compassion and … create(s) empathy in those that will hopefully never have to make this choice, and that, is a very powerful tool. (Plank Magazine)

Cosmo has retired and he has plans. His wife, Dommi, has plans, too. Just different plans. Oh oh… This new short and not-so-sweet dark comedy takes a peek at love in the ‘golden years’. 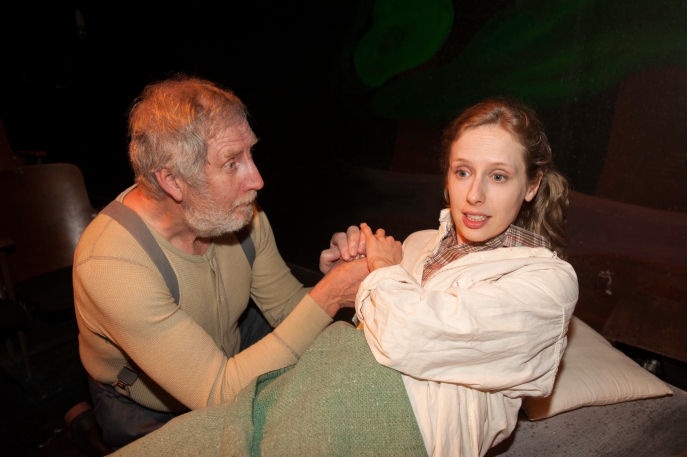 Photograph by Mits Naga.  Spinning You Home on stage at the Havana Cafe Theatre

Sarah runs away to her Grandfather’s cottage on Salt Spring Island, British Columbia. A storm rages on the Island. Trapped, Sarah and the old man, a loner with a passion for spinning tales and a thirst for over-proof rum, learn one another as they bring to life the bizarre and haunting story of legendary gold prospector, John (Cariboo) Cameron and his beautiful young bride, Sophia. Spinning You Home introduces a remarkable chapter in Canada’s gold rush history with humour and ‘spirits’ while exploring the nature and power of love and promises that bind and transcend even death.

With poetic prose, Stubbs’ play is pure Canadiana. Based on her own family’s history and involvement in the days of Canada’s Gold Rush, we are whisked away to an era that should be remembered and celebrated as part of our country’s identity and past. Spinning You Home is the perfect love letter to a time gone by… excellent addition to Canada’s literary canon of memory.   Ambitious and noteworthy.  (Fun! Fun! Vancouver!)

It’s 1924. Rose disappears from a train wreck without a trace. Twenty-five years later her red suitcase arrives, anonymously and mysteriously, triggering her daughter’s search for the truth and unlocking a bizarre chain of events. A haunted railway detective, gourmet gangster-chefs, a Puccini-singing ghost, and a host of Dickensian characters populate Vancouver’s underbelly. Wreckage is a stylish ‘gangster’ play with a dark and wicked sense of humour and the theatrical punch of a speeding train.

. . .This isn’t your grandmother’s theatre. .. this is a play that is rewriting the rules … and inviting a younger audience to experience the thrill of the stage.  (Martlet, Victoria)

…a twisting, twisted train of intrigue. … All is not what it appears to be in Wreckage. That makes for compelling drama, especially for mystery lovers, but it also reminds audiences of how tragedy unfolds.  ( Daily News, Kamloops)

… A tragic train ride, yes, but once you’re on board you’ll want to hang on until the bitter end. (Daily News, Kamloops)

The film noir adventure story is filled with atmosphere, the characters burble with eccentric passions and colourful demeanours. There is so much rich and stylish merit to Wreckage… (Roy Surette, 2005 Herman Voaden National Playwriting Competition.)